Something very excited happened on Saturday, the girls, my husband and I went into the city to see the Melbourne Symphony Orchestra (MSO) perform a special childrens session called “Movement Makes Music”

This unique collaboration between the MSO and the Australian Ballet Dance Education Ensemble will engage children aurally and kinetically. Performers will highlight the links between movement and music during this 50-minute show, in which audience members will be moved, inspired and enchanted.

We were really looking forward to the outing as Heidi’s aide had been telling us about her children’s PreSchool excursions to the MSO and how much fun they had.

Heidi was very impressed with the MSO’s ‘Wiggles’ like appearance, which we found out during the show was a special code to help us tell the different sections of the orchestra apart. 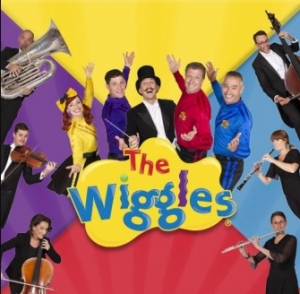 Dancers (Patrick, Alex, Polly and Hannah) from the Australian Ballet Dance Education Ensemble were fantastic and talked to the children about music and how it linked with their dance moves. Such as the “The Three Cornered Hat: Suite” where the music got faster and louder, through to a fun competition between dancer Patrick in his tap shoes and Rob from percussion to see if Rob could matching Patricks rhythm and vice versa.

Heidi enjoyed the music far more than Annie did; interestingly they were both quite engaged in the performance up until we heard a piece of music from ‘The Hours’ by Phillip Glass. Heidi curled up in her chair for a snooze during the music and was not impressed when it stopped. Annie became increasingly cranky from that point on, apparently ‘One person in the orchestra looked to me like Captain Hammer’ and that started to bother her.

Some things to note:

The 50minute show was the perfect length, holding the childrens attention without being too long.  Heidi was thrilled at the end to have an opportunity to meet the dancers and some musicians. Although she was more interested in showing off her awesome new jacket and dress than talking about the music

My husband has fond memories of visiting the MSO as a child and really enjoyed sharing the experience with his girls. He is planning to go back again with Heidi as a special father/daughter outing as she seems to immerse herself in the music, much like her Dad.

The MSO has more family friendly performances coming up and ticket prices are very reasonable – being about the same cost as a trip to the movies.

Peter Vabog has been performing as Melvin Tix for more than 21 years throughout the world. In these concerts he presents a delightful program of classical favourites, warmed by his own unique humour and magic.

His concerts are a mixture of music, balloon sculptures and lots of laughs. Melvin Tix is not only the conductor, but the master of ceremonies, the soloist, the balloon-making genius and the music arranger. Clowning Around with Melvin Tix will be an exciting performance for everyone. The 50-minute, interactive and highly engaging show is suitable for children aged between 3-8 years old.

Peter and the Wolf

During the school holidays we have a collaboration with ACMI called Peter and the Wolf, which will see the Melbourne Symphony Orchestra playing Prokofiev’s magical music live under a screen which is showing the movie.

Prokofiev’s story of the irreverent Peter has resonated deeply with generations of children, enchanted by its power and sense of fun. Now BreakThru Films and Se-ma-for Studios, in collaboration with BAFTA-winning director Suzie Templeton, bring this mesmerising and enchanting classic to the big screen.

Disclosure: We received free entry to the MSO ‘Movement Makes Music’ performance. No financial payment was offered nor accepted for this post. All opinions expressed are purely my own.